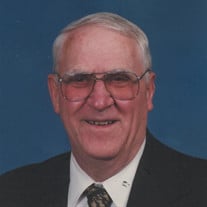 Charles B. Baker, 92, of North Sewickley Township, (Ellwood City) , passed away peacefully on Tuesday, March 21, 2017 at Creek Meadows Nursing Home in Zelienople. He was born on September 13, 1924 in Ellwood City, PA, to the late Charles W. and Suzanne Welsh Baker. He attended Lincoln High School in Ellwood City . He was a member of the First Christian Church, VFW Post #252, where he helped form the Honor Squad, and also a member of the American Legion. He was a lifetime member of both the Castlewood Rod & Gun Club and the Ellwood Wampum Rod & Gun Club, where he served on the Board of Directors. Charles was a very active outdoorsman who loved to hunt, fish, and spend time at his camp. He was a handyman who always carried a toolbox and helped anyone in need of repairs. He loved spending time with his family and friends, especially his grandchildren. Charles worked at the former B&W Tubular Products Co. in Beaver Falls as a crane operator in the Cut Off Department until retirement in 1984 after 42 years of service. Charles served in the US Army from 1942 to 1946 during WWII holding the rank of PFC – Tech/5 where he was awarded the Asiatic-Pacific Theater Ribbon with 1 Bronze Star, Philippine Liberation Ribbon, Good Conduct Medal, and the Victory Medal – WWII. Charles was a lifetime member and former Assistant Fire Chief of the North Sewickley Vol. Fire Dept., where he helped start the North Sewickley Twp. Ambulance Service. He is survived by his loving wife of 70 years, Mary Peters Baker. Also surviving are two sons and their spouses: Larry C. (and Loraine)Baker of New Castle and Bruce W. (and Cynthia) Baker of Harmony PA; Five grandchildren: Meghan, Emily, Philip, Cassidy, and Casey; and 5 great grandchildren: Craig, Madison, Luke, Callie, and Rayleigh. In addition to his parents, he was preceded in death by two brothers, Raymond J. and Bernard M. Baker. Friends will be received from 2 to 4 and 7 to 9 P.M. on Friday, March 24, 2017 at the TURNER FUNERAL HOME, 500 Street, Ellwood City. Services will be conducted at 11 AM. On Saturday, March 25, 2017 at TURNERS with Mr. Thomas A. O’Brien, Minister of First Christian Church, officiating. Burial will be in the National Cemetery of the Alleghenies, Pittsburgh. The North Sewickley Twp. Vol. Fire Department will perform a service at 7 PM on Friday. Full military honors will be observed by the Veterans Honor Guard. They should meet at the funeral home at 10:30 AM. on Saturday. Memorial donations may be made to the First Christian Church, Ada Drive, Ellwood City PA 16117. You may read the obituary, sign the guestbook, or send condolences at: www.turnerfh.com

Charles B. Baker, 92, of North Sewickley Township, (Ellwood City) , passed away peacefully on Tuesday, March 21, 2017 at Creek Meadows Nursing Home in Zelienople. He was born on September 13, 1924 in Ellwood City, PA, to the late Charles W.... View Obituary & Service Information

The family of Charles B. Baker created this Life Tributes page to make it easy to share your memories.

Send flowers to the Baker family.