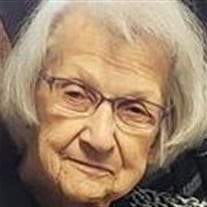 Betty J. Weingartner Fontana, 96, of Ellwood City, passed away peacefully in her home on Monday afternoon, September 9, 2019. She was born in Ellwood City on January 11, 1923, to the late Clarence and Grace Newton Weingartner. She graduated from Lincoln High School in 1941, and worked as a telephone operator at the Bell Telephone office in Ellwood City. She also worked at the Bell Memorial Church Youth Center. She was a longtime member of Bell Memorial Presbyterian Church, where she took attendance for years, and belonged to the Leona Lash Guild and Bell Tower Sunday School class. She enjoyed garage sales and word puzzles. Betty was preceded in death by her husband, Amey N. Fontana, whom she married May 23 1950. He died on September 25 1992. She is survived by one son, Rick (and Roselyn) Fontana of Fombell, and one daughter, Toni (and Robert) Kastroll of Zelienople. Three grandchildren also survive: Emily and Noah Kastroll, and Brock Fontana. In addition to her husband, Amey Fontana, she was also preceded in death by one son, Mark N. Fontana, who died January 23 2019. Friends will be received from 5:00- 8:00 P.M. on Thursday, September 12, in the TURNER FUNERAL HOME, 500 6th Street, Ellwood City. Services will be conducted on Friday, September 13, at 11:00 A. M. at TURNERS, with her pastor, Rev. Ray A. Medina of Bell Church, officiating. Burial will be in Slippery Rock Church Cemetery, Wayne Twp. Memorials may be made in her name to Bell Memorial Church, 610 Line Avenue, Ellwood City, or to the Ellwood City Public Library, 415 Lawrence Avenue, Ellwood City PA 16117. You may sign her guestbook, or send an online condolence at: www.turnerfh.com

Betty J. Weingartner Fontana, 96, of Ellwood City, passed away peacefully in her home on Monday afternoon, September 9, 2019. She was born in Ellwood City on January 11, 1923, to the late Clarence and Grace Newton Weingartner. She graduated... View Obituary & Service Information

The family of Betty J. Weingartner Fontana created this Life Tributes page to make it easy to share your memories.