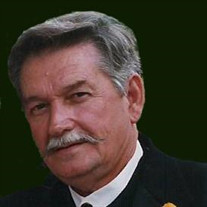 Benjamin Anderson III, 81, passed away on Thursday, November 26, 2020, at Jefferson Hospital in Jefferson Hills, PA. He was the son of the late Ben Jr. and Grace Alice (Oliver) Anderson Bartle and was born November 1, 1939, in Ellwood City. He is survived by his loving partner for over 30 years; Charlotte Edinger; his sons; Benjamin (Robin) Anderson IV of Ellwood City, William (Laura) Anderson of Center Twp., and Douglas (Lori) Anderson of Ellwood City; his daughters; Pamela (Robert) Ottaviani of Ellwood City, Kimberly Smith of Zelienople, and Anita (Fred) Orozco of Petrolia; his ex-wife with whom he shared his children, Donna Anderson; his grandchildren; Shawn Plassmeyer, Shannon Jolly, Brienne Peters, Brooke D’Angelo, Joe Anderson, Christian Anderson, Abigail Anderson, Chelsey Smith, Joshua Anderson, Tomianne Anderson, Matthew Orozco, Jenna Mullen, Jacinto “Jake” Orozco, and Benjamin Orozco; his 18 Great Grandchildren; Brothers; Rollin (Carolyn) Geddes-Anderson of Knoxville, TN, Dennis (Karen) Anderson of Las Vegas, NV, Kenneth (Paulette) Anderson of Fayette City, PA, Robert (Shirley) Anderson of Hanover, PA, Lenard (Marjorie) Anderson of Fombell, PA, and Timothy Anderson of Fombell, PA; his numerous nieces, nephews, friends, and fellow volunteer firefighters. He was an active member of the Franklin Township Volunteer Fire Department for over 60 years. Ben and his good friends Jim Norton and Larry Follett were known as the 3 Amigos by the other firefighters. Known as “Gentle Ben” to many, he enjoyed Harley Davidson motorcycles, a good bourbon, and listening to his family and friends. He would say “with so many people talking, someone has to listen.” He was a “tinkerer” and loved to fix things and was always willing to help on projects. He worked as a maintenance foreman for Babcox & Wilcox and Koppel Steel before his retirement after 40 years. He also worked as a truck driver throughout his life and long into his retirement with his final work at Bessemer Trucking. He was preceded in death by his stepfather; William D. Bartle; his son-in-law; Burton Smith; his brother; Bruce Anderson; and his granddaughter; Faith Anderson. Interment will be in St. Mark’s Lutheran Cemetery in Fombell. Due to the Covid-19 Pandemic, all services will be private. In lieu of flowers, the family requests memorial contributions be sent to the Franklin Township Volunteer Fire Department, 808 Old Zelienople Road, Ellwood City, PA 16117 in honor of the deceased. Arrangements entrusted to THE TURNER FUNERAL HOME located at 6th and Park in Ellwood City.

Benjamin Anderson III, 81, passed away on Thursday, November 26, 2020, at Jefferson Hospital in Jefferson Hills, PA. He was the son of the late Ben Jr. and Grace Alice (Oliver) Anderson Bartle and was born November 1, 1939, in Ellwood City.... View Obituary & Service Information

The family of Benjamin Anderson, III created this Life Tributes page to make it easy to share your memories.