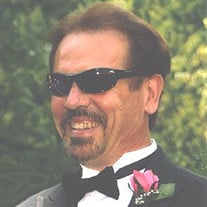 Barry J. Jesseman, 63, of Franklin Twp., died unexpectedly on Sunday, March 3 2019 at UPMC Passavant McCandless. He was born in Rochester PA on January 23, 1956, to William J. Jesseman of Melbourne FL, and Carol Kirkham Jesseman Cutich, of Franklin Township. Barry graduated from Riverside High School in 1975, and played baseball in the County League and umpired. He enjoyed camping and fishing. For over 12 years, he owned Snake Pro drain cleaning service. In addition to his parents, he is survived by two sisters and one brother: Sharon DiCerbo of New Castle; Kelly Gavrile of Ellwood City; and Timothy J. (and Marcy) Jesseman of Daugherty Twp. Several nieces and nephews also survive. He was preceded in death by one brother, David Scott Jesseman, who died in 1995; and by two brothers-in-law, John Gavrile, and Joseph DiCerbo, both in 2018; and by a great nephew, Adrian Holmes, in 2015. Friends will be received from 4:00 -7:00 P.M. on Thursday, March 7, 2019 in the TURNER FUNERAL HOME, 500 Sixth Street, Ellwood City. Burial will be in Locust Grove Cemetery, North Sewickley. Memorial donations may be made to the St. Jude"s Research Center, (www.stjude.org), 262 Danny Thomas Place, Memphis TN 38105. You may sign his guestbook, or send your condolences online at: www.turnerfh.com

The family of Barry J. Jesseman created this Life Tributes page to make it easy to share your memories.

Send flowers to the Jesseman family.