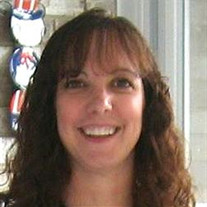 Barbara Ann Calve Young, 51, of Ellwood City, passed away peacefully, on Wednes day, April 11, 2018 after a long battle with ALS. She was born in Ellwood City, on July 5 1966 to the late Joseph and Margaret "Peg" Ann Reese Calve. Barbara graduated from Lincoln High School in Ellwood City, and West Liberty (WV) State College near Wheeling. She was a member of Christ Presbyterian Church in Ellwood City, where she had served as a deacon. She was employed for many years as a dental hygienist at Dr. Richard Barnes" Dentist office in Ellwood City. With her husband, she was co-owner of Young"s Custard Stand in New Sewickley. Barbara belonged to the Order of Eastern Star in Ellwood City. She enjoyed scenic trips and catching up on all her favorite TV shows. Her family meant everything to her. Surviving are her loving husband, Paul W. "Rusty" Young, whom she married in 1991. Also surviving are two daughters, Carli Ann and Samantha Kaye Young, both at home. She is also survived by her sister-in-law, Wesley Ann (and Vince) Calve Meneice of Ellwood City, and their children, Sarah and Andrew Calve; cousins including Janice and Thomas Boone; her aunt Jennie Safreed and uncle Nick Calve; as well as sister-in-law and brother-in-law, Michelle and Steve Podlaski and their children, Tyler and Katie Podlaski. In addition to her parents, Barbara was preceded by her brother, David J. Calve, who died in 2001. The family will receive friends from 2-4 P.M. and 6-8 P.M. on Saturday April 14 , 2018 in the TURNER FUNERAL HOME, 500 Sixth Street, Ellwood City. A celebration of her life service will be conducted on Sunday, April 15 at 2:00 P.M. at Christ Presbyterian Church, 325 Spring Avenue, Ellwood City, with the Rev. R. Tod Custer, pastor, officiating. Burial will be in Locust Grove Cemetery. Memorial donations may be made to the ALS Association of WPA, 416 Lincoln Ave., Millvale PA 15209, or University of Pittsburgh, Center for ALS Research, c/o UPMC, 200 Lothrop Street, Pittsburgh, PA 15213 You may read the obituary, sign the guestbook, or send your condolences at: www.turnerfh.com

Barbara Ann Calve Young, 51, of Ellwood City, passed away peacefully, on Wednes day, April 11, 2018 after a long battle with ALS. She was born in Ellwood City, on July 5 1966 to the late Joseph and Margaret "Peg" Ann Reese Calve. Barbara... View Obituary & Service Information

The family of Barbara Ann Calve Young created this Life Tributes page to make it easy to share your memories.