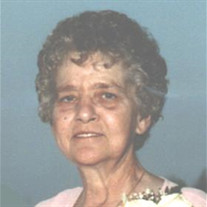 Alice E. Woodrow, 77, of Portersville, passed away peacefully on Monday morning, October 16 2017. She was born in Ellwood City, PA on May 10, 1940 to the late Harold and Alice Pander Funkhouser. She graduated from Lincoln High School (Ellwood City) in 1958 and worked at Airways Industries in Ellwood City, and later at American Eagle Outfitters in Warrendale before retiring. She was a longtime member of the Ellwood City Free Methodist Church. Alice enjoyed watching her granddaughter Alyssa grow up, family gatherings, the yearly class of 1958 luncheon reunions, and going on trips with friends. She was an avid Pirates and Steelers fan. She is preceded in death, in addition to her parents, by her husband, Gerald L. Woodrow, Sr., who passed away on May 24 2000. She is also preceded by her son-in-law, Dale S. Twaddle in October, 2010; a brother Clyde Funkhouser, and a sister, Anamarie Funkhouser Smith. She is survived by one son and one daughter: Gerald L. Woodrow, Jr. of Portersville; and Sandra L. Baker Twaddle of Cranberry Twp. She is also survived by two granddaughters, Alyssa Baker Carter and Katherine M. Twaddle; one absolutely wonderful great grandson, Ethan John Carter; a former grandson-in-law, Aaron Carter; two brothers, R. Wesley and Frank D. Funkhouser and many nieces and nephews. Friends will be received from 11:00 A.M. until 1:00 P.M. on Thursday, October 19, at the TURNER FUNERAL HOME, 500 Sixth Street, Ellwood City. Private services will be conducted at 1:00 P.M. Thursday October 19 at TURNERS. Burial will follow at Locust Grove Cemetery. Memorial donations may be made in her name to St. John"s Specialty Care Center, 500 Wittenberg Way, Mars, PA 16046. You may read the obituary, sign the guestbook, or send condolences at: www.turnerfh.com

Alice E. Woodrow, 77, of Portersville, passed away peacefully on Monday morning, October 16 2017. She was born in Ellwood City, PA on May 10, 1940 to the late Harold and Alice Pander Funkhouser. She graduated from Lincoln High School (Ellwood... View Obituary & Service Information

The family of Alice Woodrow created this Life Tributes page to make it easy to share your memories.

Send flowers to the Woodrow family.