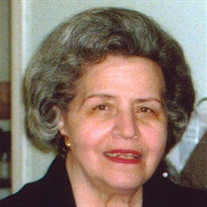 Alice M. Puzz, 91, of Ellwood City, passed away unexpectedly on Thursday, June 13, 2019 at Concordia Personal Care in Plum Boro PA. Born November 28, 1927 in Ellwood City, she was the daughter of the late John and Mary (Dorchak) Poydock. She graduated from Lincoln High School in 1945. After 35 years as a secretary, first in the Guidance Counselor office and then the Business Office, she retired from the Ellwood City Area School District. She was Russian Orthodox by faith and enjoyed spending time with her family, playing bingo and cards, listening to music, following current events, and doing crossword puzzles. She closely followed the Pittsburgh Steelers, Pittsburgh Pirates, and Pitt Panthers football and basketball teams. Alice is survived by sons, John (Christina) Puzz of Plum Boro, PA and David (Carol) Puzz of Norman, OK; one brother, Albert Poydock of Bellflower, CA; grandchildren, David and John Puzz, Anna (Jim) Nesbit, Alyse Zvirman and Eric Zvirman; great grandchildren, Ethan, and Evelyn Nesbit; and many nieces and nephews. Alice was preceded in death by her husband of 51 years, Arthur E. Puzz whom she married on January 21, 1950. He died September 11 2000; and her sisters: Mary Fray, Helen Gergosky, and Margaret Tomlinson. Friends will be received on Tuesday, June 18 2019 from 4-7pm at the Turner Funeral Home, 500 Sixth Street, Ellwood City, where a Service will be held, Wednesday, 11:00 A.M. The family would like to extend a special thank you to the staff at Concordia Personal Care for their wonderful care while Alice was a resident. To honor Alice, donations may be made to Ellwood City Area Historical Society, 310 5th St., Ellwood City, PA 16117. Arrangements entrusted to Soxman Funeral Homes, Ltd. 412-793-3000.

Alice M. Puzz, 91, of Ellwood City, passed away unexpectedly on Thursday, June 13, 2019 at Concordia Personal Care in Plum Boro PA. Born November 28, 1927 in Ellwood City, she was the daughter of the late John and Mary (Dorchak) Poydock. She... View Obituary & Service Information

The family of Alice M. Puzz created this Life Tributes page to make it easy to share your memories.

Send flowers to the Puzz family.