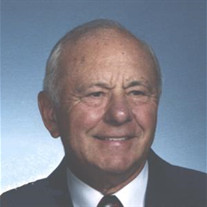 Albert W. Poholsky, 96, of Ellwood City, passed away peacefully on Sunday January 7 2018 at his home. He was born in Sagamore PA on November 29 1921, to the late Stephen and Anna Gaborack Poholsky. Al graduated from Lincoln High School in Ellwood City, and Geneva College with a B.S. in accounting. He served his country as a medic during World War II in the US Army Air Corps and earned the rank of sergeant. He worked in the sales department of the Fittings and Forgings department at the former B. & W. Tubular Products Co. in Beaver Falls and the Koppel steel mill. Al was a mason for 46 years in the Ellwood-Parian F. & A.M. Lodge #599; New Castle Consistory and Syria Shrine in Pittsburgh. He was a longtime member and treasurer of the Ellwood City Rotary Club. Al also was recognized as a Rotary Paul Harris Fellow for his service. Al belonged to the former St. John the Baptist Orthodox Church in Ellwood City, and later the St. Nicholas Church in New Castle. Al enjoyed golfing , traveling with his wife, and attending golf tournaments-- especially the Masters. He loved his family and grandchildren, and even taught his grandson how to golf. He is survived by his wife of 74 years, Joan Lloyd Poholsky. He is also survived by two children : Graceann (and George) Snyder of Ellwood City; and Thomas Poholsky of Kennerdell PA. Two grandchildren survive: Melissa Snyder (and fiancé Pete Leck) and Chad (Marissa) Snyder. In addition to his parents, he was preceded in death by one brother, Jack Poholsky. One sister-in-law, Goldie Poholsky, survives, in West Pittsburg, as well as nieces and nephews. Friends will be received from 2:00- 5:00 P.M. on Wednesday, January 10, 2018 in the TURNER FUNERAL HOME, 500 Sixth Street, Ellwood City. An orthodox mass will be celebrated on Wednesday Jan. 10 at 5:00 P.M. at TURNERS, with the Rev. Fr. Richard Salley, of St. Nicholas Orthodox Church, New Castle, as celebrant. Burial will be in Locust Grove Cemetery. Members of F & A.M. #599 are asked to meet at 1:30 P.M. Wednesday at Turners to conduct services there at 2:00 P.M. A Flag presentation ceremony will be conducted by the Veterans Honor Guard at Turners. Members are asked to meet at Turners at by 2:00 P.M. prior to conducting their services. Memorial donations may be made to the Ellwood City Area Public Library, or to the Ellwood City Rotary Club. You may read the obituary, sign the guestbook, or send condolences at: www.turnerfh.com

Albert W. Poholsky, 96, of Ellwood City, passed away peacefully on Sunday January 7 2018 at his home. He was born in Sagamore PA on November 29 1921, to the late Stephen and Anna Gaborack Poholsky. Al graduated from Lincoln High School in... View Obituary & Service Information

The family of Albert W. Poholsky created this Life Tributes page to make it easy to share your memories.

Send flowers to the Poholsky family.